We offer a variety of both, over the road truck and industrial replacement engines for the Caterpillar C7. Our remanufactured CAT C7 engines come as a 3/4 long block and are not running trim condition. Our remanufacturing process strips the core down to the bare block whereas the camshaft, crankshaft, engine block, connecting rods and cylinder head are all built back to original OEM spec. The long block is then finished with new aftermarket gaskets, liners, bearings, pistons and rings.

At the turn of the century there was a lot of buzz around a new diesel engine being produced at Caterpillar, one that could meet the growing emissions requirements enacted by the EPA. The Caterpillar C7 Engine was supposed to be the golden child in Caterpillar diesel engine lineup one that combined raw horsepower with computer controlled clean emissions. However, sometimes things dont go according to plan. The engine was produced from 2003 to 2009 and was installed primarily in over the road medium duty class 8 trucks. All of the big players in the trucking industry hopped on board hoping the CAT C7 was going to live up to the hype. Paccar, Freightliner, Ford and GMC all purchased the engine in droves. The technical classification of a medium duty tuck is a single drive axel with a gross vehicle weight of 18,000-33,000 lbs. mostly box tucks, tow trucks, daycabs, and straight trucks.The Caterpillar C7 was designed mostly out of necessity vs. practicality. Caterpillar, needed to produce a new engine that was going to meet or exceed the Tier Ratings enacted by the EPA in 1994 to curb diesel engine emissions. The stricter Tier 4 emissions requirements went into effect January 1, 2004. The Caterpillar C7 was released in 2003, only months ahead of the Tier 4 ratings change, and replaced the popular 3126 model. Older CAT engines like the 3116 or 3126 were essentially grandfathered into the older tier rating requirements and did not need to be upgraded.

We offer a variety of used Caterpillar C7 ACERT used diesel engines that fit both mid duty class 8 trucks as well as industrial applications. The most common truck engine we have in stock are Caterpillar C7 ACERT 210 HP truck engines. For firetruck, RV and Marine applications C7 ACERTS can be max rated via the ECM to 300-360 HP. All of our used runners are test run and inspected for wear.

The CAT C7 was popular in the Mid 2000s mostly found in box tucks, delivery vans, tow trucks, daycabs, and straight trucks. PACCAR, Freightliner, GMC and Ford were the big manufactures to install this engine into their mid duty lines.

Also Check: How To Get A Cat Smell Out Of A Room

The CAT C7 diesel engine was produced to accommodate strict emissions regulations in the U.S. Many mechanics have reported several issues with the components intended for reduced emissions. Issues include low power, low fuel economy, and overheating when driving up an incline.

Here are some common engine problems:

Unlike the CAT C7 diesel engine, the Navistar International diesel series includes a wet-sleeve cylinder design, which enhances engine durability and serviceability. The wet-sleeve design allows the engines to be rebuilt to factory specifications, sometimes without even removing the engine from the vehicle. Some mechanics claim the wet-sleeve design also gives DT466-equipped vehicles greater longevity, sometimes 700,000 miles before requiring a major repair or rebuild. Mechanics report the CAT C7, without a wet-sleeve design, tends to be harder to repair and rebuild than Navistar International DT466 / DT466E diesel engines.

The CAT C7 engine was intentionally designed with original components and fuel management systems to meet emission reduction regulations in the early 2000s. Navistar International had two upgrades to address escalating emissions regulations. However, mechanics report the CAT C7 engine had more issues with its componentry, such as ACERT technology failures.

You May Like: What Is The Healthiest Way To Feed A Cat

When looking at both the Cat C7 vs 8.3L Cummins, both diesel engines work best in heavy-duty vehicles and severe-duty machinery. They both have life expectancies of 500,000 when properly maintained.

The CAT C7 was introduced in 2003, about the time when Cummins discontinued the 8.3L ISB model due to stricter emissions regulations. The CAT C7 was designed to meet those stricter emissions regulations, but CAT also decided to discontinue production in 2009 when even stricter regulations went into place by 2010. With fewer numbers of CAT C7 engines in the aftermarket, replacement parts and repairs can be more expensive than competitor diesel engines.

A big difference between the CAT C7 and Cummins 8.3L is weight. The CAT C7 engine weighs 1,425 pounds without fluids, while the Cummins 8.3L weighs 1,630 pounds. Medium-duty vehicles may have a harder time accommodating the heavier Cummins engine.

The standard CAT C7 engine was designed with a maximum tow capacity of 9,000 pounds, but the manufacturer offered more horsepower and torque with optional upgrades. A standard Cummins 8.3L engine could exceed a 20,000-pound towing capacity, which made it a popular choice for powering recreational vehicles, motor homes, and school buses.

A Group Of Friends Is Going On Holiday Together Codility

Read Also: No Cat Food What Can I Use

A Division Of Us Engine Production

Due to its short production life, there tend to be far more competitor diesel engines left in vehicles used in the aftermarket.

Also Check: How Much Are Kitten Shots At Petco

Towing specifications for the CAT C7 diesel engine depend on vehicle configurations requiring more horsepower or torque. The engine was built to accommodate heavy-duty vehicles with gross vehicle weight up to 33,000 pounds. Additionally, the standard CAT C7 engine was designed for a maximum tow capacity of 9,000 pounds. Upgraded horsepower and torque were optional.

To help power a wide range of heavy-duty vehicles, the diesel engine provided original equipment manufacturers with a range of horsepower and torque capacities. The engine was available in 8 different horsepower ratings , as well as various torque ratings . The highest horsepower version required an optional dual turbocharger.

You May Like: Kitten Food Vs All Life Stages

The Cummins 5.9L engine had been in production more than a decade before the CAT C7 was first introduced in 2003. The CAT C7 engine was intentionally designed with original components and fuel management systems to meet emission reduction regulations in the early 2000s. While the Cummins 5.9L engine started with a mechanical design in 1989, the manufacturer upgraded the 5.9L ISB engine with a 24-valve design and electronic components to comply with the regulation in later years. 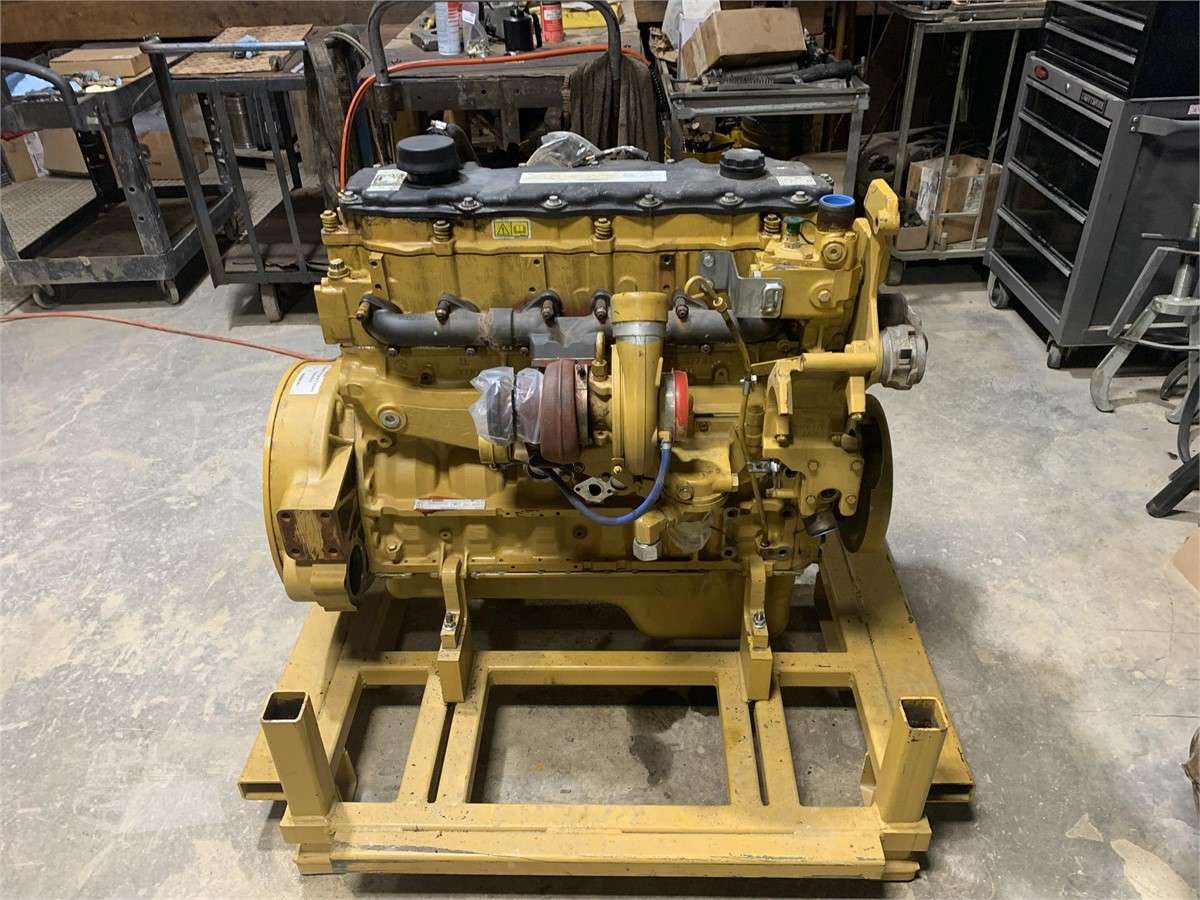 The Caterpillar C7 engine is an line 6 cylinder diesel fueled engine with a displacement of 7.2 liters. The maximum heavy duty hp dry weight is 1,425 lbs., with an oil capacity of 4.75 gallons or 6.75 gallons with the deeper sump pump and oil pan. The cooling system and water pump allow up to 3.99 gallons. The CAT C7 was available in 8 different horsepower ratings from 210 hp 360 hp with torque ratings from 520-925 lb-ft of torque. The 330 hp and 360 hp models were only available in recreation vehicles and firefighting equipment. The first Caterpillar C7 models were available in both low or high torque options. The torque options allowed for different transmission applications preferred by the various big truck manufacturers. Each manufacturers torque capacity was different and had to be matched with the CAT C7 of choice.Overall the CAT C7 ACERT Engine represents the beginning of the end for Caterpillars long rein with over-the-road diesel engines. The company ultimately didnt feel the cost of continuously producing emissions upgrades was worth the time and effort and exited the over the road industry in 2010 paving the way for Cummins and Paccar. Caterpillar still makes a great engine and continues to produce off-road construction equipment effected less by strict emissions regulations.

A Worldwide Leader In Remanufactured Engines

Extra care and high-quality fluids are needed for CAT C7 diesel engines, especially when operating under severe-duty conditions . High mileage engines will likely need component replacements in the aftermarket, such as pumps, sensors or transmissions.

CAT C7 engines produced from approximately 2007 to 2009 require the use of Ultra Low Sulfur Diesel .

Hover over image to zoom

Quality & Service You Can Trust!-Our products are manufactured to meet or exceed OEM specifications.-We ONLY sell Quality, Reliable and Guaranteed products!-Over 11 branches throughout the USA for fast and efficient delivery.

Don’t Miss: How To Take Out Cat Pee Smell From Carpet

Side Effects Of Contrast For Cat Scan

Do Cats Help With Depression

When Can Kittens Start Eating Food

Remedies For Hairballs In Cats

How Much Does It Cost To Get A Kitten Neutered

How To Teach A Cat Not To Bite